Authenticity and curiosity — qualities of a thriving workplace

We are very fortunate to have the opportunity to work with Mr Cris Conde who shares his considerable wisdom on building a diverse and open-minded workplace with Adam Bryant and David Reimer from ExCo. 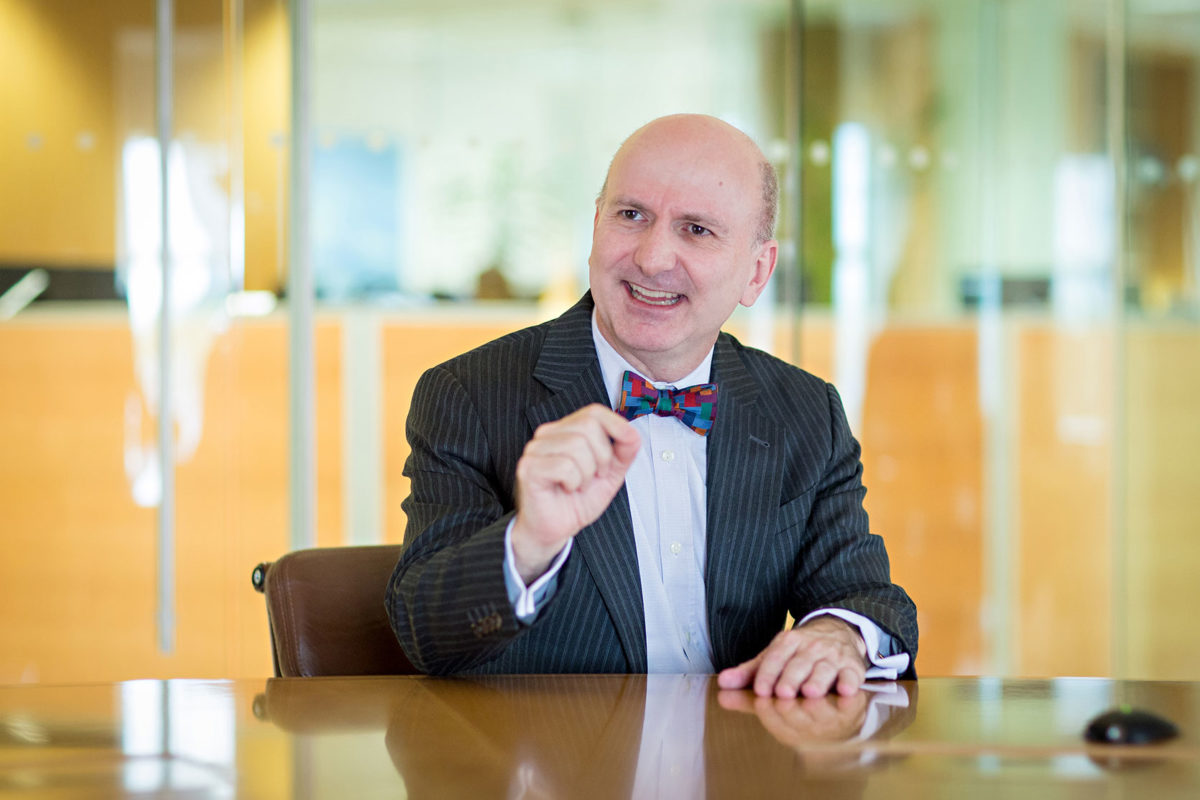 Reimer: How has the role of the director evolved?

Conde: Directors are now playing a bigger role as coaches for the CEO. They are needed because, during the last two years, CEOs have had fewer people to talk to as counselors, and directors have stepped in. Directors shouldn’t be formal coaches to the CEO, because that creates all sorts of conflicts. But you have to step in as an informal coach.

Bryant: What are the most common themes that come up in those conversations?

Conde: The first is to find out whether the CEO is coachable. One way I do that is to ask them how they manage their time. If you are reflective, then you will be interested in your own time management and you will definitely not think that you have all the answers.

I think too many CEOs are spending time on things that they shouldn’t, and the reason they are spending time on those things is because of the insufficiencies of their management teams or individual leaders. So my first piece of advice is to spend more time on the things that only a CEO can do. Too often, CEOs get caught up in all sorts of minutiae, like formatting board presentations. You have to focus instead on what actually matters, what’s going to move the needle, and on reducing the latency of decision-making in your organization. Only CEOs can do that.

Reimer: What are the big issues that directors are weighing in on now?

Conde: Diversity has turned out to be far more important than anything else. People are not passive aggressive anymore about diversity. Everybody says, “Yes, we want to do it.” Focusing on diversity has been really one of the secrets of my success and building that into the DNA of every organization I’ve been involved in.

I used to get into arguments about whether my focus on diversity was about me making a political statement through the leadership of the company. I don’t get those arguments anymore. First of all, the economic argument for non-diversity is pretty poor. But progress is always slow on this front because diversity is really hard. It’s so much easier to hire and work with people who are just like you. You can build a nice, comfortable, good business that way. But you can’t build a great business without diversity. So the question is, do you want to be more comfortable or more successful?

Bryant: How did you make it part of the DNA of your companies?

Conde: Some of it is using metrics and making sure people are held accountable. But I also was very lucky to have a workforce early on with a lot of LGBTQ employees. I realized that if you didn’t discriminate, and if you acknowledge everybody for their entire person, then you would reduce employee attrition. And in any business, reducing employee attrition is a wonderful thing. Also, diversity adds value to every decision.

There are also moments when you can send strong signals as a leader. In the ’80s, a very good programmer who worked for me had a sex change operation, and I remember walking up to her soon afterward to ask her advice on an algorithm I was working on. Only later did I realize that when I was talking to her, everybody in the office was watching to see how I would react. It’s about making people feel like they’re part of the group.

The fact that we had the same kind of conversation we always did seemed to provide a sense of relief in the organization. And then I asked myself, how can I provide that relief 24 hours a day? How can we have an organization that, instead of a bunch of look-alikes, is as diverse as a coral reef? It’s about making people feel like they’re part of the group. If you can do that, and remove that anxiety, everything works so much better. We did that by championing everybody’s differences and by having special interest groups.

We also removed line managers from the first few rounds of interviews, because they were inadvertently bringing biases to the interview process. We got rid of incentive bonuses for people who recommended someone they knew to join the company, because that also reinforces biases. And we focused on hard metrics, such as tracking the diversity of applicant pools. It’s not enough to just say that it’s important for your company’s values, because not everyone will act on them the way you wish they did. It does require metrics and checking up on things.

Looking back, I wish I had spent even more time following up on diversity metrics, because compliance was spotty in some divisions and in some countries. Those managers would claim to value diversity, but didn’t want to slow down the hiring processes already in flight. So they basically wanted to focus on diversity next time they did a search, but not on current searches. And that repeated itself. Without good diversity metrics you end up with pockets of lip service and non-compliance.

Reimer: As a director, how do you think about this moment when companies are being called upon to sort of address all of society’s challenges?

Conde: Companies are being asked to step in because there’s such a vacuum of leadership in governments around the world. But the question is how. It’s important to be authentic in everything that you do. It’s not a matter of slogans or jumping on bandwagons. What are you going to do that is authentic, meaning that it reflects the value system of your company, and that actually has a chance of making a difference?

When I’m giving guidance on this, I ask a couple of questions. What will you say no to that you would have said yes to before? What are examples of decisions that would have been different before you adopted this stance? Otherwise, it’s just a bunch of words that make everybody feel good but don’t actually lead to different actions. Companies are being pushed in many different directions, but my advice to CEOs is that you should only do the things that will actually make a difference and that feel authentic for the company. It’s a fool’s errand otherwise. A single company cannot change society.

Bryant: What are the X factors that you look for in CEO candidates?

Conde: I look for innate curiosity. The job requires incredible listening skills, and without curiosity you’re not going to be interested in improving your game. So I look for expressions of curiosity. I’ve also started using a new approach for interviewing CEOs. I’ll ask them to draw me the org chart of their existing company, or their previous one if they’re not currently a CEO. The job requires incredible listening skills.

I watch for the order in which they draw the boxes. The first box is what the CEO would really prefer to be doing if they were a division manager. That’s the area that they’re most proud of. The next to last is the one where the CEO is the weakest. And the last one is one where the only reason it exists is as an amenity to the CEO and that he or she has trouble justifying. The order that the boxes are drawn gives me clues about the candidate’s strengths and weaknesses.

Reimer: What is your advice to first-time CEOs?

Conde: With all their previous jobs inside an organization, there was probably a natural cadence to those roles. If you’re a sales director, you have quarterly review meetings and quarterly targets, for example. As a CEO, you don’t have any of those markers that allow you to choose how you are going to spend your time.

So my advice to first-time CEOs is to tell them the CEO job actually is, in fact, as ill-defined as it seems, and that it’s up to them to decide how to spend their time and build their own cadence. As CEO, you are in charge of building a great company and there is no one way to do it. So the first thing I do is to reassure them that if it looks kind of gray, it is that way by design, and that it’s up to them to make their mark on it and create their own structure.

We use cookies on our website to give you the most relevant experience by remembering your preferences and repeat visits. By clicking “Accept All”, you consent to the use of ALL the cookies. However, you may visit "Cookie Settings" to provide a controlled consent.
Cookie SettingsAccept All
Manage consent

This website uses cookies to improve your experience while you navigate through the website. Out of these, the cookies that are categorized as necessary are stored on your browser as they are essential for the working of basic functionalities of the website. We also use third-party cookies that help us analyze and understand how you use this website. These cookies will be stored in your browser only with your consent. You also have the option to opt-out of these cookies. But opting out of some of these cookies may affect your browsing experience.
Necessary Always Enabled
Necessary cookies are absolutely essential for the website to function properly. These cookies ensure basic functionalities and security features of the website, anonymously.
Functional
Functional cookies help to perform certain functionalities like sharing the content of the website on social media platforms, collect feedbacks, and other third-party features.
Performance
Performance cookies are used to understand and analyze the key performance indexes of the website which helps in delivering a better user experience for the visitors.
Analytics
Analytical cookies are used to understand how visitors interact with the website. These cookies help provide information on metrics the number of visitors, bounce rate, traffic source, etc.
Advertisement
Advertisement cookies are used to provide visitors with relevant ads and marketing campaigns. These cookies track visitors across websites and collect information to provide customized ads.
Others
Other uncategorized cookies are those that are being analyzed and have not been classified into a category as yet.
SAVE & ACCEPT